There are a lot of elements to a commercial door.

It can be overwhelming to the new or inexperienced to the door industry. So, let's cover common commercial door basics and vocabulary: 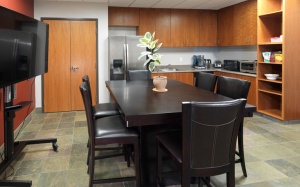 Astragal: A strip of steel or wood, which covers or closes the gap between the edges of a pair of doors.

Anchor: A device used to attach a door frame to the surrounding structure or wall.

Backset: The distance from the edge of a door to the center of the hole drilled for a lockset or deadbolt.

Ball Bearing Hinge: A hinge with ball bearings between the hinge knuckles, to reduce friction.

Base Anchor: A piece of metal attached to base of a door frame, to secure frame to the floor.

Butt (Hinge): A type of hinge designed for mortising into the edge of a door and into the rabbet of a door frame.

Cased Opening: A steel frame with no stops.

Change Key: A key on the lowest level of a master keying system. Change keys are also referred to as day keys. Typically change keys are issued to personnel that require access to one or two areas in a facility.

Continuous Hinge: A hinge that extends the full length of a door. Also known as a piano hinge.

Cylinder: The cylindrical-shaped assembly containing the tumbler mechanism and the keyway, which can be actuated only by the correct keys.

Cylindrical Lock Prep: Cutout in a door for locksets.

Deadbolt: A heavy duty door lock that has no spring action but is operated by a key or a thumb turn.

Double Doors: A pair of doors that meet in the middle of the door frame when closed.

Door Closer: A mechanical device that closes a door, in general after someone opens it, or after it was automatically opened.

Dutch Door: A door divided into two parts horizontally, allowing one half to be shut and the other left open.

Electric Strike: An electrical device that permits releasing of the door from a remote control.

Exit Device: A door-locking device designed to grant instant exit by pressing on a cross bar that releases the locking bolt or latch.

Face (Frame): Exposed part of frame when viewed perpendicular to face of the door also referred to as trim.

Fire Rated Door or Frame: The ability of a door or frames to provide an effective barrier against the passage of flames, smoke and toxic gases and / or to reduce the transmittance of radiated heat.

Flush Bolt: A door bolt mounted (flush) on the inside face or edge of a door. Most often used on the inactive door of a pair of doors.

Flush Door: A door without glass and/or louvers.

Hand: A term used to designate direction in which a door swings. e.g., right hand or left hand

Header: A horizontal frame piece at top of opening or top member of transom frame.

Hinge Jamb: A vertical piece of a door frame prepared for installation of hinges.

Jamb: A vertical piece of a door frame assembly, adjacent to wall.

Kick Plate: A protective plate applied on the lower rail of the door to prevent the door from being marred.

Knocked Down Frame: A door frame furnished in three parts for assembly in the field.

Laminated Glass: A type of glass that holds together when shattered.

Latch Bolt: A bevel-headed spring bolt that holds a door closed, and is usually operated by a knob or a lever handle

Latch Protector (Latch Guard): A piece of hardware (attached to door) that completely covers the latch area protecting the latch bolt from prying and shimming.

Lite: Preparation in a door for view window, vision and/or glazing including glass stop and glazing bead.

Louver: An opening in a door with a series of slats or blades to allow passage of air.

Master Key: A key that opens every one of a given set of locks.

Masterkey System: An arrangement of cylinders having individual key changes, which permits them all to be operated by one key, called a master key.

Mortise: A cavity made to receive a lock or other hardware.

Mortise Lock: A lock designed to be installed in a mortise rather than applied to the door’s surface.

Mortise Lock Prep: Cutout in the edge of a door for mortise lock.

Mullion: A fixed or movable post dividing an opening vertically.

Pocket Door: A door that is prepared to slide into a pocket built in the wall.

Push Plate: A plate applied to the lock stile of a door, to protect against soiling and wear.

Removable Mullion: A mullion which can be temporarily taken out of opening to allow the passage of large objects through the opening.

Rough Opening: The size of a wall opening into which frame is to be installed.

Self-Closing: When a door must close on it’s own, with the assistance of closing hardware. Properly installed door closers or spring hinges will make a door self-closing. Self-closing doors are required for fire rated openings.

Sidelite Frame: The same as a borrowed lite except that it is attached to door frame.

Silencer: A rubber part attached to the stop on a frame to cushion the closing of a door

Stop: The part of frame against which door closes.

Strike: A metal plate that is pierced to receive the bolt or latch of a lock, when projected.

Strike Jamb: A vertical piece of a door frame prepared for installation of lock strike.

Threshold: A strip fastened to the floor beneath a door, usually required to cover the joint where two types of floor material meet.

Transom Bar: The part of a transom frame which separates the door area portion from the transom area portion.

Transom Frame: A door frame having a panel, louver, sash or glass above door opening with or without transom bar.

Transom Panel: A panel installed in a frame above the door opening. 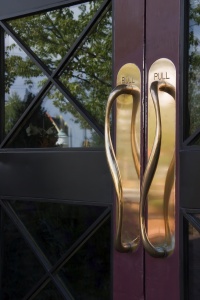 Add to Favorites
Not registered yet? Register Now! Forgot Password?